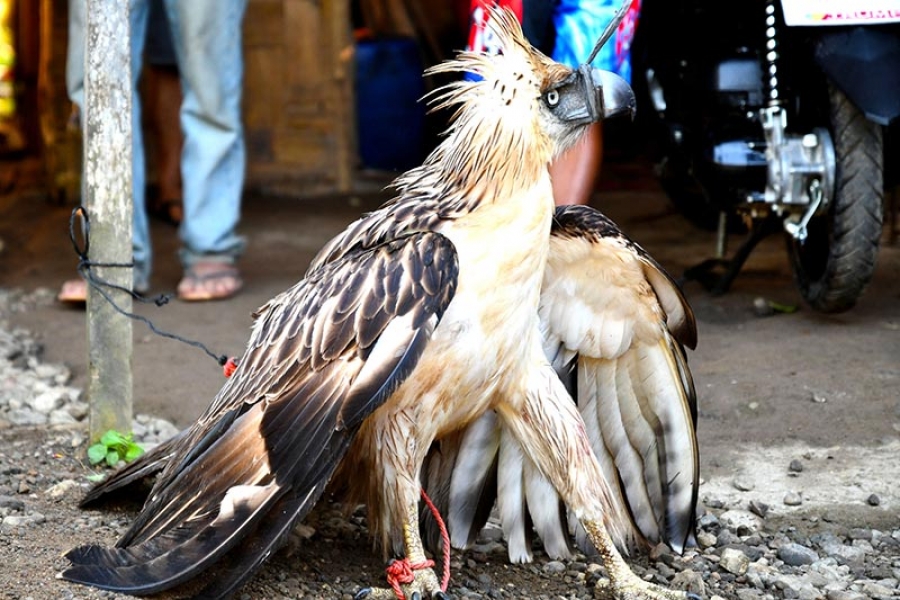 MAITUM, Sarangani (January 10, 2021) – This Philippine Eagle was rescued by Mang Ganang (in photo), 43, from being trapped in the thorny vines of Rattan while the bird was preying on a monkey in Salbanog Falls, Barangay Ticulab around 2pm on January 8. A team sent by Mayor Bryan Reganit retrieved the eagle then relayed the matter to the Community Environment and Natural Resources Office for the proper handling of the eagle and later turned over to the Philippine Eagle Foundation in Davao City. On January 2, 2017, a juvenile Philippine Eagle was found by Gibson Badal, a resident of Barangay Batian which is within Mt. Busa complex, a declared key biodiversity area and an important bird area. Mt. Busa is home to critically endangered, threatened, vulnerable and rare bird species. On December 13, 2019, the second Philippine Eagle rescued in Sarangani Province was rescued in Barangay Lumatil, Maasim by the Kamal family around 2pm and based on initial assessment, the closest possible habitat of the bird was Mt. Busa. (Joylyn Ty – John James Doctor/MAITUM INFORMATION OFFICE)

Read 23 times
back to top